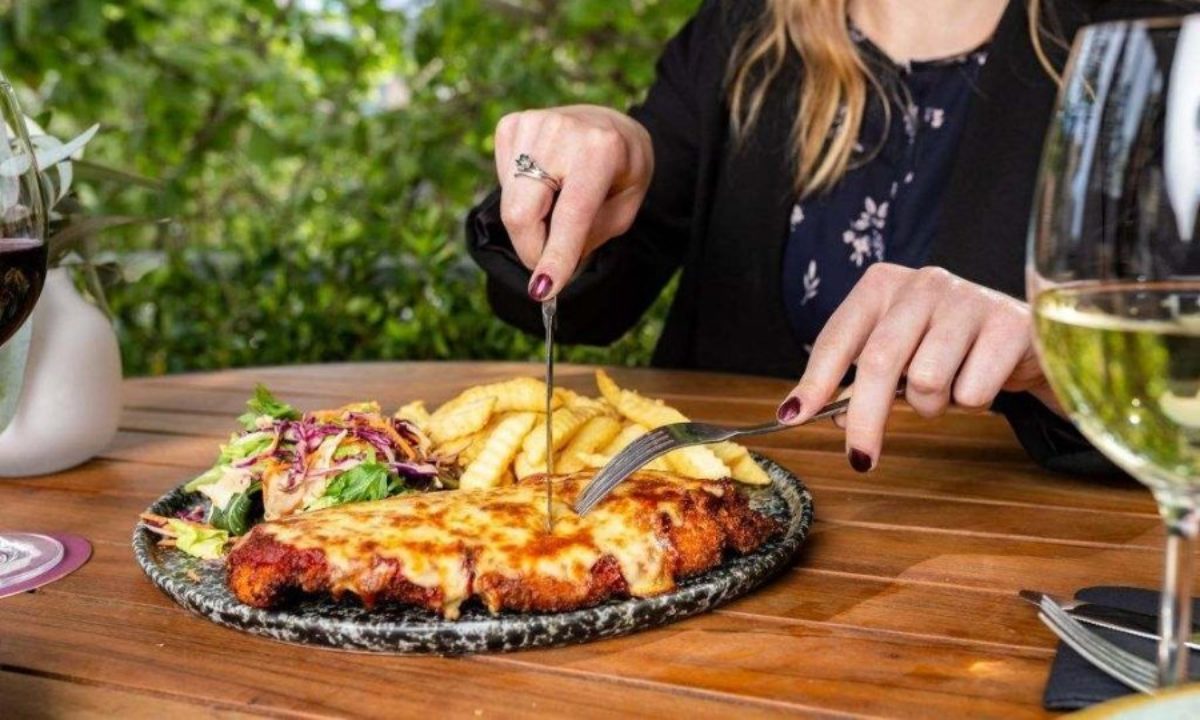 Where to get your parma fix in Melbourne

We’ve found some of the best options in town for this pub-grub classic. Whether you want a traditional parma or variations on the theme, step this way.

The Duke of Wellington

Melbourne’s oldest pub, The Duke of Wellington has a parma to suit all hunger levels. Go the whole hog with the classic Duke chicken parma. Or try the petite parma with smoked ham if you don’t want to overdo it. Both come with rustic fries and leafy salad.

This is parma central. Choose a chicken, veal or eggplant parma prepared in one of a dozen styles, from original to tandoori. Then order something equally good to sip on – Mrs Parma’s has lots of Victorian craft brews and cider on tap, plus more by the bottle. In other words, this is parma paradise.

Set up under those iconic orange umbrellas at Fed Square, Time Out is a parma gem hidden in plain sight. These loaded schnittys come oozing with delicious melted cheese and a rich sauce. Perfect for your winter comfort food cravings and only $19 a serve. Available all day every day, any time is parma time at Time Out.

One of the CBD’s few old corner pubs still going strong, the Imperial Hotel has been serving up chicken parmas for generations. Now though, it’s not one-parma-for-all. Choose the regular parma with shaved ham, or try the eggplant with Napoli sauce and mozzarella. Both come with skin-on fries and slaw, and you can add veggies, gravy or aioli.

North Melbourne is blessed with great pubs, including The Leveson. It’s in a Victorian-era building with a very modern interior. But don’t worry, there’s plenty of old-school pleasure on the menu. Thursday’s your best bet, with a $25 parma-and-craft-pint special for lunch and dinner. Or you can swap the ale for a glass of wine or a soft drink.

For a vegan take on an eggplant parma, step inside Carlton spot Green Man’s Arms. Their meat-free, dairy-free version of the pub standard comes with cabbage slaw and potato aioli. The Green Man’s vego fare is Israeli-inspired, with Middle Eastern flavours on show. Paired with great local ales on tap, it’s pub grub with a green difference.

Kensington’s Hardimans Hotel is pretty posh for a pub. The parmas are a bit posh too, though not the price tag. The flavours are bold, from the garlicky crumbs on the eggplant parma to the slightly salty prosciutto on the chicken. Both parmas come with thick-cut chips, iceberg salad and ranch dressing. And all day on Tuesdays they cost just $17.

Here’s some A+ news for RMIT students past and present. The Oxford Scholar re-opened in 2019 after a big, beautiful renovation. The menu’s had a major overhaul too, but you’ll still find a classic chicken parma. It comes with shoulder ham, salad and fries. And Thursday is $15 parma night, with regular, vego and weekly parma specials.

Where better to down a tried-and-true pub fave than Melbourne’s oldest building, the 1837 Mitre Tavern. Head to the bistro to order the Mitre chicken parmigiana. The seasoned breadcrumb crust is topped with melted cheese. Served with crunchy chips and salad, it’s a plate-filling steal at $23.90.

If you would like more information, head over to the official What’s On Website where we sourced this information from: